If you’re after security and peace of mind, not just any baby monitor will do. With all the latest technological advancements, you can see what your baby’s up to whether you’re out doing your chores or resting in the couch. Video baby monitors are a great tool to have for the modern parent.

Unlike sound and motion detectors, video monitors gives you a “peek” allowing you to keep an eye out while your child is sleeping. They can be pricier than the other two, however they come packed with more features.

Whether you’re a first-time parent or you’re in the market for your second or third monitor, you’ll benefit from the the following list of the best video baby monitor. I’ve narrowed down the best ones, at varying price points, so you can find one whatever your budget may be. 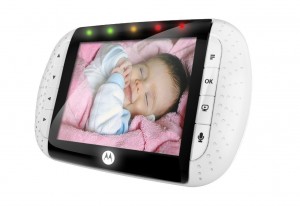 One of the premium models, the Motorola MBP36 sports a 3.5 inch color LCD display which is big enough for a good view. You can make the camera pan, tilt and zoom using the remote control on both sides of the screen. You can put the camera on top of the crib so you can get a full view of your baby. With a support stand, you can leave it on the table while you do other stuff.

It also features adjustable volume so you control whether you want to hear your baby’s every move, or set it low so you’ll only hear when he’s crying. You can talk to your baby with the 2-way communicator – pretty useful to reassure him when he’s suddenly woken up crying. With the lullaby feature, you have  choice of up to 5 polyphonic lullabies to help put baby to sleep. It has a max range of 200 m (about 650 ft), plenty enough to get around the house unless you have a really large house.

Packed with infrared night vision, you still have a clear image even in low light setting. It also has a temperature sensor, though this feature is not much use. It is super quiet too, so it does not wake up the baby when the camera moves around. The only downside is its limited battery life which requires constant recharging. The battery should hold about 8-10 hours, although it’s best if you plug it in during the night.

The cheapest in this list, the Infant Optics is the one to get if you’re on a budget. Costing just a little less than $100, this is a good product to get if you’re just getting started with video monitors. It is quite durable, despite its cheap plastic feel which some users have mentioned but for a fraction of the cost of other models, it can be expected.

Featuring a 2.4-inch color screen, powered by a rechargeable battery, this nifty gadget allows up to a maximum of 150 feet coverage in enclosed areas (up to 800 feet in open spaces) which is good enough for most mid-sized homes. The camera does not have a pan-tilt feature like the Motorola has, but it shoots clear images in full color and even in night vision.

It has a voice-activated power saving mode, so when your child is asleep and no noise is detected for 3 minutes, the monitor turns off saving electricity. Another cool thing about this model is that you can get additional camera (it is expandable up to 4) so it’s great for growing families. If you’re looking for an affordable video monitor that has all the essential features, the Infant Optics is the one to get.

Like the Motorola, this Samsung monitor also features a camera that can pan, tilt and zoom. But unlike the Motorola, this model has a nice power-saving standby feature which parents really love. The Samsung 3037 also produces clear images in the dark with its night vision capability. You have an option to remotely turn on a night light (attached to the camera) as well to help soothe baby.

It’s two-way talk feature is comparable to that of the Motorola MBP36. One of the highlights of this model is that it provides interference-free video up to 900 feet, so it’s perfect for families with many smartphones, tablets and other wireless devices. Its long-range antenna makes it possible.

It has a simple-to-use interface: much easier to navigate than the MBP36. It is also expandable; you can add up to 4 cameras so it’s a good option for big and growing families, or if you have twins.

An upgrade from the best-selling Summer Infant baby monitor, the Boost has newer and better than its predecessor. Whereas the Touch has a range of up 400 feet, with the Boost you get up to 600 feet range. The screen size is the same at 3.5 inches, but the Boost has a higher definition so you can see your baby more clearly.

The original smartphone-like touch-screen controls of the Touch has been made more user-friendly, with multi-level zoom (which is unlike other monitors which can only zoom up to 2x). The Summer Infant Boost has pan, tilt, zoom and two-way communication features which other high-end, more expensive models have. It also has night vision so you can see your baby even in the dark.

It has a temperature sensor although many users complained that the readings are a way off, which is probably because of the camera heating up hence the incorrect readings.

If you want an all-around monitor that not only captures video, but sound and movement as well, then go for Angelcare AC110. A complete 3 in 1 monitor, it can give you peace of mind knowing that you’re monitoring your baby in three ways. Perhaps the most significant part of this gadget is that it sounds an alarm after 20 seconds of no movement detected, and it could save your child’s life.

With Sudden Infant Death syndrome (SIDS) as the leading cause of death in babies and infants, having the Angelcare on is like having someone watch your baby 24/7. Its movement detects even the baby’s slightest movements. It features a “ticking” sound when it detects movement which you can also set to just flash a green light if you don’t want the sound. It’s screen is much smaller than the others (it’s only 2.75 inches) but all the other baby-sensing capabilities makes up for this.