Ride On toys are probably the very first steps to a toddler’s independence. As you already know, when toddlers grow, they have the tendency of imitating whatever older people do, like driving or riding a bike.

When you get your kid a toy as a gift, you not only make him happy, but also help him explore new things. In the process, the toddler may learn some new skills.
Ride-On toys come in two modes, ones that are run by a battery, and ones that don’t. The battery-run toys are much more fun for the kids, but less safe.

What to Look For

In some respects, you’ll find it a bit tricky finding the best ride on toys for toddlers. This is because you have to take a number of aspects into consideration, like cost and safety, with the latter being of more significance.  Also, consider additional aspects like design, sturdiness, size, etc. This article takes you through what most experienced parents consider favorable for their young kids.

Let’s take a look at the top ride on toys for toddlers and preschoolers:

This is a very simple and one of the safest toys for children. It takes the shape of different animal models, like a pig, mouse, cow, bee, tiger, and a ladybug. And yes, the Wheely Bug is an award winner too.

It is PVC-free and non-toxic, thus very harmless for your kid. The wheels are multidirectional, which support a wooden base and a layered sponge for comfortable padded seats.

Unlike other ride on toys, the Wheely Bug allows your little tot to move in all directions, even making a 360-degree turn. It comes in two different sizes; for kids of ages 1.5 to 3 years, and for kids who are older than 3. The Lionheart Wheely Bug doesn’t have pedals.

Step 2 Up & Down Roller Coaster 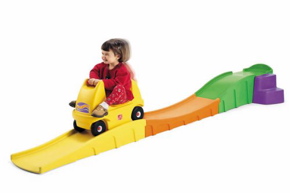 This coaster riding toy provides preschoolers with the thrill to shoot down the ramp, across the backyard. When pushing the car back up the coaster, it helps develop coordination, gross motor skills, and balance.

The recessed wheel keeps the coaster car stable till the kid is ready for another ride. Recommended for kids aged 2 to 5 years, while maximum weight is 50 lbs.

Toddlers feel safe and secure due to footrests, a high back, and a handrail. At the top of the coaster, there is two non-slip steps, which helps the toddler get into the car. 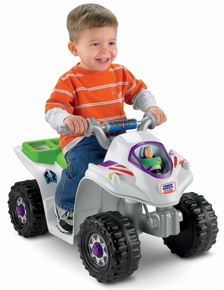 This is a 4-wheeler battery-powered toy that delights any young kid. Recommended for kids aged from 1.5 to 3 years, it features a very simple go-and-stop push button.

It also entails a cargo rack at the back, with a Buzz Lightyear spaceship on the front. This Power Wheels Disney toy comes with a low seat and footrest, making it easy and safe to ride and straddle.

This ride-on toy moves at a maximum speed of 2 miles an hour, which is a fairly low speed and thus suitable for toddlers. It also features a 6V battery, and charger included.

It is popular with children, mainly because of its versatility – it can be converted into three different models! And can be used by both the littlest toddlers and the much older ones.

This Rock Roll n Ride dolly enables a kid (especially the little ones) to have some fun rocking on it, but only when its wheels are attached to a rocker base. The same toy converts to a long push bar handle, so as an adult can take the child for a stroll.

Once the child becomes a bit older, he or she can pedal himself or herself around. Here, the adult doesn’t really need any tools. You can just fold up the toy’s footrests, adjust the seats, and remove the handgrip.

The same thing (lack of tool requirement) applies whenever you want to convert from one model to another.

This Trike is recommended for kids aged 1.5 to 5 years. Its sturdiness, wide base, thickened rims and a low COG make the toy a safe and anodyne for the kid.